The Ruby flip-flop operator is an example of a very obscure part of Ruby. Probably few people have heard of it. It’s not covered in any book I’ve read and it doesn’t even appear to be mentioned in the old ISO standard.

Briefly, it’s a form of if with two conditions, using syntax that looks like a range literal. It’s usually run in some kind of loop. The body is not executed until the first condition becomes true, and then it is executed again until the second condition becomes true, at which point it the body is not executed again. You can use it to count the number of days between Tuesday and Thursday, for example.

The name ‘flip-flop’ comes from the electrical component that has a similar function, and the functionality in Ruby comes from Perl, as do many of Ruby’s more obscure features.

Some people think that the flip-flop operator is so little-known and rarely used, or perhaps not useful or even confusing, that it should be removed from Ruby. I’m interested in research on how Ruby is used in practice so I decided to see what the facts really are. To do this I have a large corpus of Ruby code on a machine, mirrored from RubyGems and extracted to be easy to query. This comprises around 1.6 billion lines of Ruby code.

The gems are tailor, a static analysis tool that helps you follow style guides. It uses flip-flops in 3 places which are all pretty sensible applications of the operator where it wants to make a predicate on code that is between two tokens [1], [2], [3].

Secondly, antlr3, a Ruby parser written in the Antlr parser generator. Again this is idiomatic and clear use of the flip-flop and it’s being used in a similar way as in tailor [4].

Thirdly, the xmigra gem, a tool for managing evolution of your database schema [5].

There is also an unless flip-flop, which isn’t covered in the Ruby spec suite or the MRI tests, so I’m not even sure anyone knows that one exists, except for the author of blue-shell [6]. The same line appears in the cf, static and vmc gems.

And finally lazy-enumerator, which is obsolete as it was a back-port of some Ruby 2.0 functionality. It’s also an interesting case as the upper bound is just true [7].

The 1.6 billion lines I searched included all versions of all gems, and the operators I found appeared in several versions of these gems for a total count of 69 instances, or about 1 in every 23 million lines of Ruby code, or 1-in-10 million to round to an order of magnitude.

This isn’t an argument to remove the flip-flop operator. I often say that as a Ruby researcher and implementor I don’t have an opinion on the design of the Ruby language and I’m not going to advocate its removal just because it’s rarely used. Unlike some other Ruby language features like Proc#binding, I can’t imagine that flip-flops cause any implementation difficulties no matter what VM technology they’re using, and if you aren’t using them then the fact that they exist shouldn’t slow down the rest of the language in any measurable way. I may not choose to add it if I was doing Ruby from scratch, but there’s no empirical reason to remove it now.

I benchmark a lot of things in Ruby, so I also decided to benchmark how fast flip-flops are. Of course the performance of flip-flops doesn’t really matter since they’re so little used, but it may at least be academically interesting to see what the different implementations do with them. I tested MRI 2.3.0, Rubinius 3.14, and JRuby+Truffle at 05a8efa with GraalVM 0.10. When JRuby re-did their compiler for the new version 9.0 they didn’t reimplement the operator and they haven’t received any complaints yet, so I benchmarked JRuby 1.7.24 with invokedynamic, which is the last version where it worked. I used benchmark-ips 2.5.0 to run this benchmark which counts the number of days between Tuesday and Thursday, implemented using a flip-flop, and an equivalent version implemented using local variables directly.

I’m using the new iterations option of benchmark-ips here because optimising implementations of Ruby like JRuby+Truffle interact badly with the transition from warmup to timing phases.

These are the results: 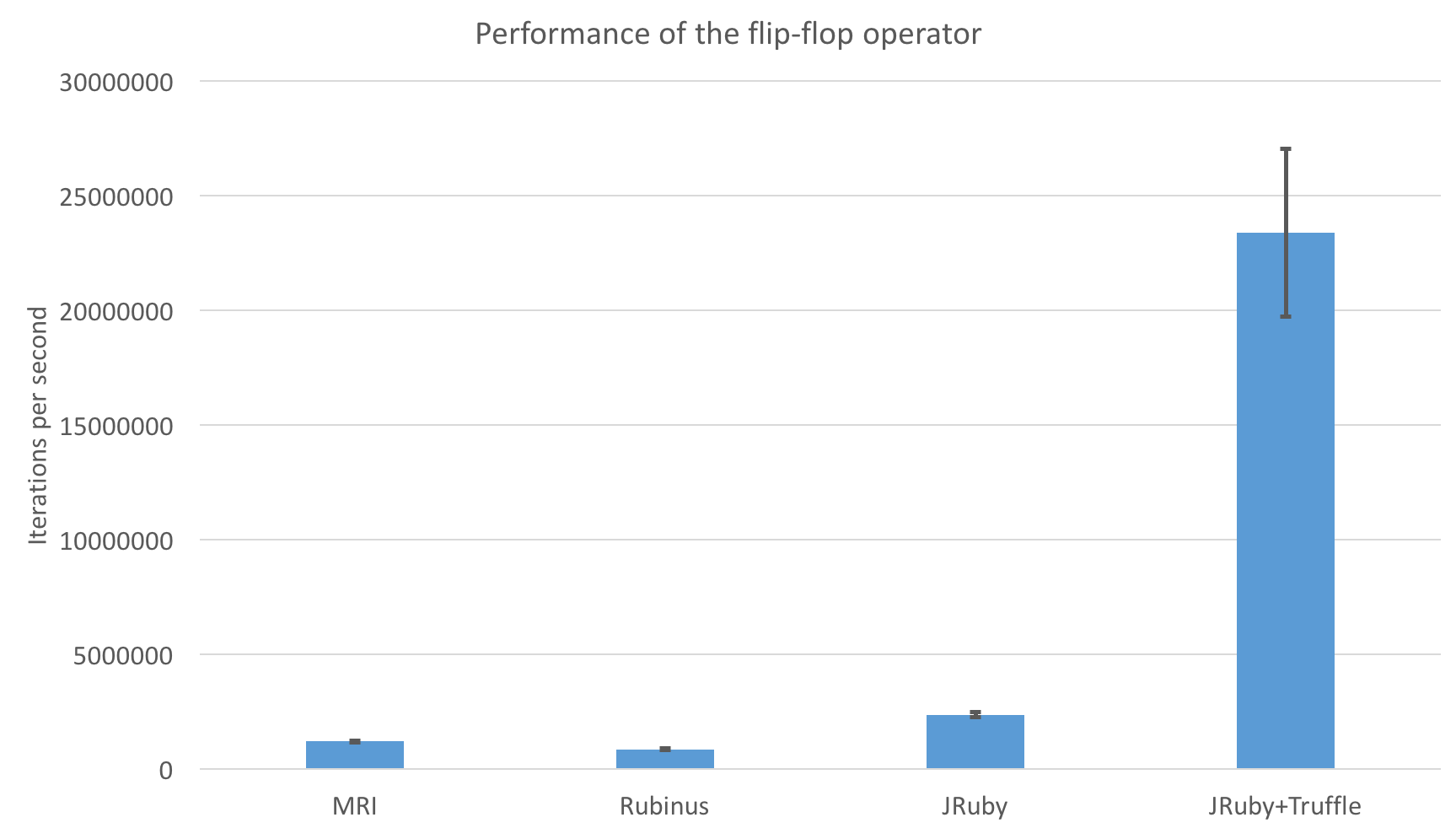 Rubinius is even slower than MRI at flip-flops, even with its JIT. JRuby is about twice as fast as MRI, and JRuby+Truffle an order of magnitude faster than that.

Using a flip-flop is 24% slower in MRI than using local variables directly, which is understandable as MRI without a JIT has very little opportunity to remove abstraction. It’s also a lot slower in Rubinius. Both JRuby and JRuby+Truffle use a JIT to remove the abstraction, and so there is no significant difference between the two forms.

I tried to benchmark topaz but I was unable to get it to run benchmark-ips, even with a few fixes.

Kevin Menard reviewed a draft and suggested I look at uses of unless flip-flops. The flip-flop schematic is by inductiveload and is in the public domain.